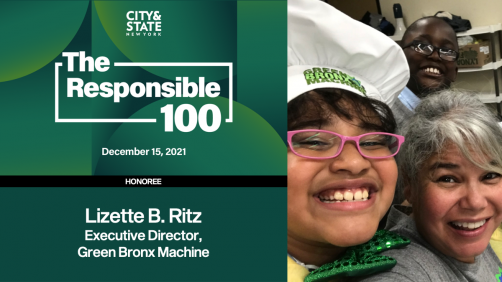 Ritz and the other honorees – leaders in business, government, nonprofits and advocacy – exemplify the optimism and idealism that make New York a national leader.

I am humbled and very proud to be among the leaders called out by City & State for my work with Green Bronx Machine,” said Ritz.  “For far too long, those least responsible for injustice, inequity, failing education, health disparities, poverty, social and environmental racism have had to bear the brunt of the burden and consequences. Social responsibility means moving those who are apart from success to becoming a part of it in ways that benefit everyone. High-performing schools, happy, healthy children, living wage jobs – we are farming and growing citizens and success at Green Bronx Machine.”

Each year, City & State shines a light on socially responsible leaders in New York with The Responsible 100 Award. The award honors 100 of New York’s most outstanding responsible executives, thought leaders, visionaries and influencers who are setting new standards of excellence, dedication and leadership in approving their communities and making transformative change.  See the full list of honorees and read about these extraordinary individuals HERE.