Corn is called maize in most countries, from the Spanish word, maiz. The word maiz is derived from the word mahiz, from the native Taino language of the Caribbean.

Corn is recognized as a cereal crop, and part of the grass family.

An ear or a cob of corn is actually part of the flower, and each corn kernel is an individual seed.

Corn always has an even number of rows on each cob.

Corn is produced on every continent on Earth, except for Antarctica.

Corn is used as a major feed crop for livestock and poultry, and it’s used in domestic pet food.

The United States produces nearly 40% of the world’s total corn harvest, making it the biggest corn producer in the world. China comes in second.

There are many colors of corn – black, blue, gray, purple, green, red, and white – while yellow is the most common.

Many juices and soft drinks are sweetened with corn – one bushel (about 56 pounds) can sweeten 400 cans of soft drinks.

An average corn plant grows to about 10 feet tall, but the world record for tallest corn stalk is 33 feet!

It takes 91 gallons of water to produce one pound of corn.

Corn is used to produce biofuels and is the primary source of ethanol production in the United States. 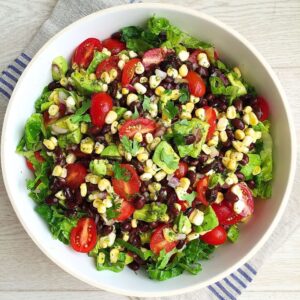