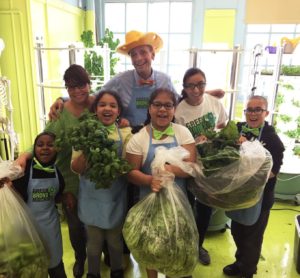 This is the broadcast’s first Emmy win. The honor comes on the heels of Growing a Greener World receiving the coveted 2017 Pioneer Taste Award® in April.

The Mission of the show has always been to help others grow a greener world themselves – through gardening, responsible environmental stewardship, and building healthy communities. In 2007 Growing a Greener World explored a non-profit organization known as The Green Bronx Machine and instantly knew this was a story needing to be told.

Moved by emotion at the love and care he witnessed during filming, Executive Producer and show host Joe Lamp’l, states “After filming over 100 episodes of Growing a Greener World, I don’t think we’ve ever told a story that’s impacted me more emotionally than this one.”

Mr. Lamp’l is referring to the compelling story of educator, entrepreneur and self-proclaimed “People Farmer,” Stephen Ritz, who came from and returned to the Bronx to heal, to show love toward and to nurture generations of school children growing up in this difficult district. His thunderbolt idea, which ultimately formed The Green Bronx Machine, was to utilize gardening in the classroom to improve the lives of inner city youth.

And improve lives it has. In a community where it’s easier to get liquor than lettuce, Mr. Ritz’s non-profit has helped high school attendance improve from 40% to 93% and has reduced behavioral incidents and out-of-classroom time by a whopping 50% in the elementary school in which he teaches.

This humble man with unparalleled charismatic, infectious energy has changed the landscape of students’ lives through tireless 12-hour days where “Garden Time with Mr. Ritz” is always in eager demand. The kids are taught the botany, the biology, and the history of the fruits and veggies they grow in a way that sparks fascination and new-found ownership of the joy of growing food that is improving eating habits and helping create healthy food relationships.

And as the children love and nurture the plants they’re raising, the plants reward them with tomatoes, cucumbers, peppers, lettuce, and apples to be eaten during school lunch and taken home to their families. The sense of accomplishment and taste for success that is borne of this symbiotic relationship will carry into the rest of these kids’ lives.

The Green Bronx Machine is truly breaking new ground in the world of education. This investment of passion for our food source isn’t just working, it’s creating one person(al) miracle at a time.

The ​Growing a Greener World®​ series featuring this remarkable program will continue to resonate with future audiences, and future seasons will remain dedicated to telling these impactful stories of people creating change.

For more information about this press release contact:
Anna Shelander at 651-644-2955 AnnaShelander@worldviewcreative.com
Stephen Ritz at 917-873-6449 Stephen.ritz@greenbronxmachine.org 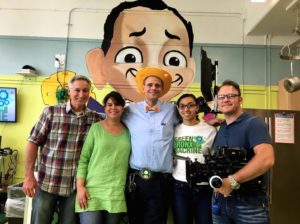 About Joe Lamp’l
Certified Landscape Professional and horticulturalist, Joe Lamp’l combines his expertise in organic gardening, landscaping and environmental stewardship with a passion for living a more eco-friendly life through his television experience as​ the creator, host and executive producer of ​Growing a Greener World®​. Mr.Lamp’l serves as a gardening and sustainability guest expert on national morning shows including NBC’s TODAY Show, ABC’s Good Morning America and The Weather Channel among others. He also broadcasts a weekly podcast series, The joe gardener Show, along with garden-related blog posts and informational resources available on the ​Growing a Greener World sister site, joegardener.com

About Stephen Ritz
Stephen Ritz is a South Bronx educator and innovator who believes that students shouldn’t have to leave their community to live, learn, and earn in a better one. Supporting generations of students to achieve personal and academic successes which they had never imagined — while reclaiming and rebuilding the Bronx — Stephen’s extended student and community family have grown more than 85,000 pounds of vegetables in the Bronx while generating extraordinary academic performance.
Contact Stephen Ritz at 917-873-6449 stephenritz.com

You guys are rock stars and we are so grateful to @QuestDX for the opportunity. Can’t wait to come visit says @StephenRitz WOULD LOVE TO ZOOM!

🥬 Westbrooke Village Elementary students have learned so much from the @greenBXmachine! 🍅 Our fifth-grade students presented their learnings at our last Trotwood City Council meeting. We loved hearing their excitement about this project! #TrotwoodAdvantage

So excited to help make this project a reality says @StephenRitz

“housing is health; health is housing”

Today we unveiled the Yankee Stadium Tower Garden, which will provide a hands-on learning experience for “New York Yankees Healthy Home Plate Program” students. We are proud to partner with @towerfarms_ & @greenBXmachine to teach local youth about the importance of nutrition.